Counting craters to estimate the age of planetary surfaces 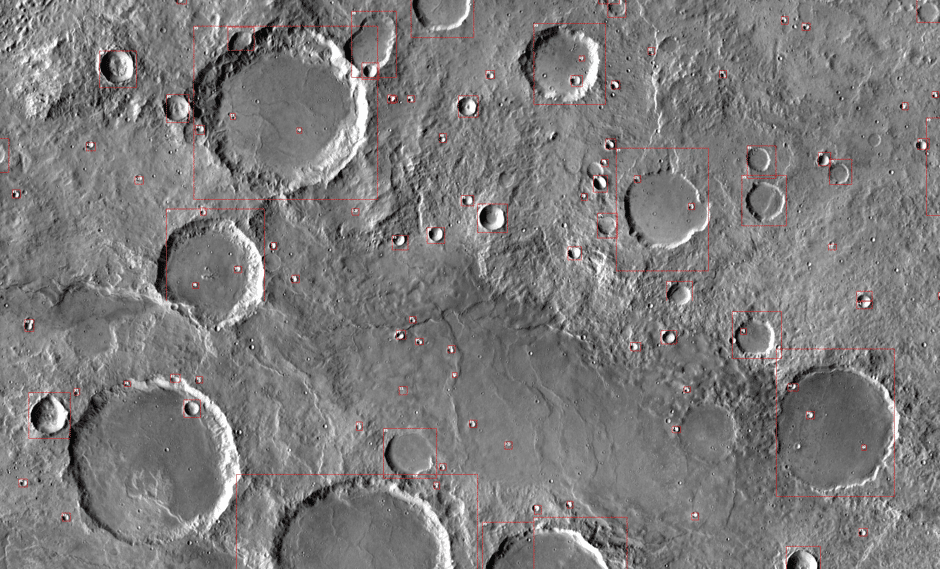 Impact craters on planetary bodies provide a wealth of information about the surface and subsurface history of that body. The age of a surface can be estimated through analysis of crater frequencies, assuming random impact rates with known long-term averages. But counting craters smaller than 1km by hand becomes an intractable task due to the sheer numbers – smaller craters occur exponentially more often that large craters due to the sizes of bodies in space. Considerable effort has been invested into developing automated techniques for the detection and counting of craters on a number of planetary surfaces, but none have progressed to become a fully automated pipeline and default tool in the analysis of planetary surfaces.

An interdisciplinary group of researchers from Curtin University’s School of Earth and Planetary Science and School of Civil and Mechanical Engineeringjoined forces with the Curtin Institute for Computation (CIC) to use machine learning to tackle the problem. Past approaches to Crater Detection Algorithms (CDAs) include image analysis techniques such as edge detection and the Hough transform, although, in recent years, some have also incorporated machine learning, including neural network architectures.  We have progressed from these techniques to use the YOLO (You Look Only Once) object detection algorithm to train a model based on an existing large crater database for the surface of Mars. The new CDA delivers detections that are as accurate as human identification.  This new CDA will be improved upon and will be used to determine surface ages of all extra-terrestrial bodies for which the image datasets are available through the NASA Planetary Data System.

This work was supported by resources provided by the Pawsey Supercomputing Centre with funding from the Australian Government and the Government of Western Australia.