While the first artificial technology (AI) program was written in the early 1950s, it has only been in recent decades that this modern technology has started to change the way we live.

Alex Jenkins, Director of the WA Data Science Innovation Hub (WADSIH), believes there are huge advantages for both businesses and society adopting this AI tech.

“AI is estimated to grow the global economy by $15 trillion by 2030,” he says. “There is an unprecedented opportunity to grow businesses, increase productivity, and create new markets.”

These opportunities will be discussed as part of CDAO Perth conference organised by data-driven market intelligence firm Corinium Global Intelligence being held next week at the Pan Pacific Hotel.

The acronym CDAO itself stands for ‘Chief Data and Analytics Officer’, one of the estimated two million new job titles emerging thanks to AI.

Mr Jenkins will be chairing the CDAO conference, and speaking during a roundtable on the topic From Ethical Data to Ethical AI.

How to ensure society adopts it in a way that’s ethical for all is one concern businesses and individuals are having about the implementation of AI.

AI and the emergence of a new workforce

You only have to look towards the advancements in self-driving cars, and the evolution of Large Language Models that can comprehend and write on par with most humans, to appreciate our lives will look significantly different 10 years from now.

The industry is rapidly evolving with new technologies being developed on an almost weekly basis in varied fields from science to art.

The creative industry is undergoing a huge revolution itself, with quirky developments such as an AI model converting text prompts into images so well that the technology recently won an art competition against human artists.

And while some are worried AI could make much of the workforce redundant, with research firm McKinsey & Company estimating as many as 45% of work activities could be automated using AI, it’s also evident millions of new job roles will also be formed.

In fact, the World Economic Forum estimates more than 97 million new jobs will be created by 2025 due to advancements in AI technology.

“A traditional take on AI is that it will disrupt blue collar jobs and highly-specialised and creative roles won’t be lost to AI. But recent developments show the opposite trend – AI is entering the creative space (such as the aforementioned AI model winning an art prize with the Midjourney website) and changing how artists work,” says Mr Jenkins.

And while changes to the workforce are emerging, more and more data is being generated around the world – something those working in AI need to look at keeping secure at all costs.

The recent Optus hack showed Australia how vulnerable our data is if it gets into the wrong hands.

And as technology advances, one thing is certain – more sensitive data will be collected around the world, and therefore the way we safeguard it is becoming more important than ever. Yet to dismiss or delete the data altogether can put the brakes on further advancements in technology.

“The balance is between the use of individual’s data versus the protection and privacy of the individual,” says Mr Jenkins. “We need to protect people’s privacy and personal information by removing sensitive information and aggregating the data, but then it’s less useful for AI.”

Mr Jenkins says the challenge is to find ways of preserving privacy and using data in a responsible way, while making it as useful as possible. He adds the EU is currently ahead of other regions when it comes to using data responsibly.

“Through the General Data Protection Regulation, the EU is protecting its citizens’ data, and this is something we should be looking towards doing in Australia,” he says.

Currently, it’s the biggest and most advanced corporations in the world, such as Meta, Microsoft and Google, that have the largest access to AI and the strongest means of using the data for future developments.

“Because AI is so expensive and requires state-of-the-art technology to access and use, there’s a worry that marginalised and lower-socio economic groups in society will be left behind,” says Mr Jenkins.

However, overall, Mr Jenkins says AI is going to have many benefits within society and allow it to grow and advance like never before.

“AI is a revolution that’s on scale with the internet,” Mr Jenkins adds. “And like when the internet saw big growth, there’s a lot of fear-mongering around it, but just like the internet, AI will completely change the way we do business and the way we live.”

Join us for the CDAO Perth conference

The CDAO Perth conference will be held on Wednesday 26th of October at the Pan Pacific Hotel, and along with AI, other key themes to be discussed include data governance, creating data roadmaps, and using data and analytics to unlock business value.

“Anyone interested in using data to grow their business should look to attend CDAO Perth – whether you’re a technology professional, owner of a startup, business leader, executive, or a company director,” says Mr Jenkins.

Through its partnership with CDAO, WADSIH is offering a $500 discount off the full ticket price, using the code CDAOPERSPON500. Tickets sales are closing soon.

You can register to attend here. 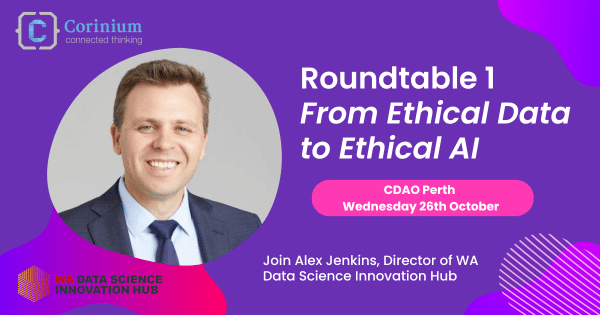